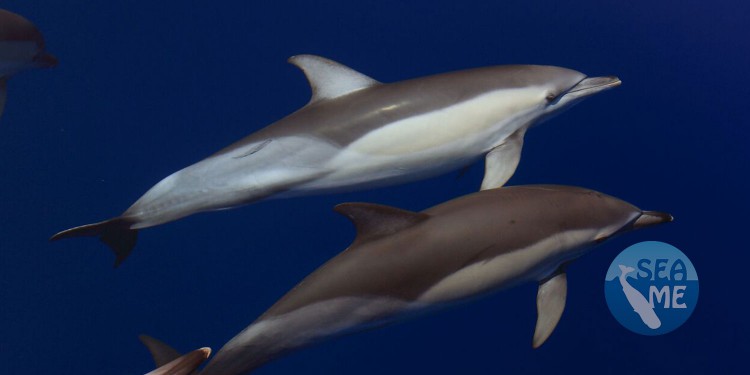 The common dolphin has a long, thin beak and slightly larger size than the striped dolphin (2.3 m and 75-100 kg of weight). It differs for the peculiar upside hourglass colour pattern on the flanks, which gives a dark V-shape below the dorsal fin, an anterior yellow patch and a light posterior light-gray patch. The body has a dark gray back and a cream belly. Gregarious species, it reaches group size of up to 100 specimens, while in the ocean it can occur in large groups of more than 1000. Its average lifespan is about 20-30 years.

This dolphin prefers both pelagic and coastal waters. Sometimes can be found associated with striped and bottlenose dolphin. Known to use co-operative methods of hunting, the common dolphin is mainly fish-feeding, preferring small fish, sometimes also cephalopods and crustaceans. It makes short dives up to 2 minutes, but dives lasting 8 minutes have been recorded. The behavior is similar to that of the striped dolphin, swimming at high speeds, also performing leaps and other aerial displays.

Despite its name, in the Mediterranean the common dolphin is currently considered among the most endangered cetacean, facing a dramatic decline in areas where it has always been locally abundant.
In Italian waters, north of the 41° parallel, the common dolphin appears to be rare, and the SEA ME-DIPNET researchers recorded in the study area only two sightings of large groups with calves and newborns.

The reasons for the decline of this species in the Mediterranean are still unclear, but probably this is mainly due to the over-fishing, entanglement in fishing gear and the effect of contaminants and pollutants. The short-beaked common dolphin in 2003 was listed as an Endangered (EN) sub-population for the Mediterranean on the IUCN Red List and is also under Appendix II of CITES.