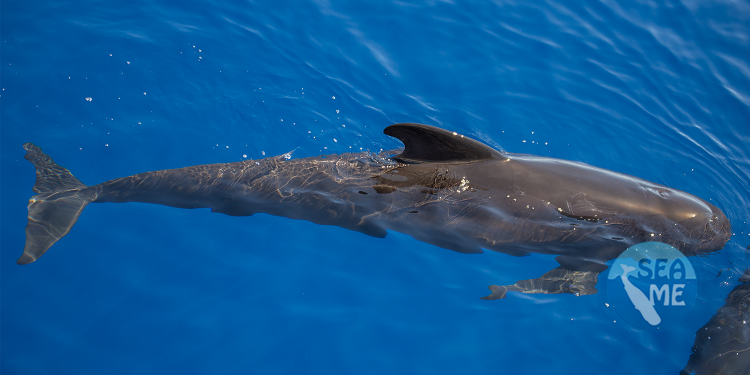 Its Latin name means “globe head” for the pronounced shape of its melon. The long-finned pilot whale is a medium-sized pelagic dolphin. Identification at sea is possible thanks to its globular head and the low dorsal fin, with a concave trailing edge and rounded apex. Its color is all black with a white or light gray anchor-shaped patch on its ventral surface. The pectoral fins are thin and very elongated.

The size of the males are between 6-7 meters long, the females, however, reach 5 meters. Males and females also differ in the shape of the dorsal fin, low and more curved in males.

Pilot whale is a highly social species. Pods can consist of tens of individuals, but some groups contain up to 100 dolphins. They often stay on the surface in close formation, the animals swimming close to each other. The strong social relationships among the members of a group would explain the mass strandings that affect this species.

Sometimes pilot whales perform the so-called “spy-hopping” behaviour. It occurs when a cetacean holds itself vertically in the water and balancing with its fluke, in order to hold its head to observe the situation above the water surface.

The average life is about 40-50 years. Long finned pilot whales occasionally strand on the north-west coast of Sardinia, while they have never been spotted in the Caprera Canyon, during the surveys carried out by SEA ME Sardinia. We have a report on the presence of this species in the other side of the Tyrrhenian Sea: a small population of long finned pilot whales was observed for a few years off Ischia, and then disappeared (courtesy: Oceanomare Delphis Onlus).

Globicephala melas is classified as “Data Deficient” (DD) for Mediterranean subpopulation and listed on Appendix II of CITES, the Washington Convention on International Trade in Endangered Species.