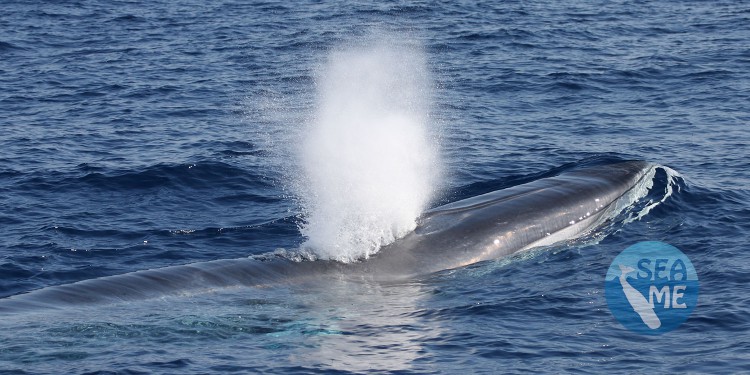 The fin whale is the only mysticete regularly occurring in the western Mediterranean Sea and the second largest (up to 22 m) and heaviest (up to 70 tonnes) mammal on earth, after the giant blue whale (Balaenoptera musculus). A fin whale can live up to 80 years. Its body shape is long and streamlined with tapered head which is flat on top, a dorsal fin located far back on its body and a large tail, rarely raised out of the water as it begins a dive.

The fin whale is gray to brown on its back and sides, while the underside of the body is white. The asymmetrical body coloration is unique to this species, which is white on the right upper and lower lip and dark on the left lips. On the back it has two pigment patterns: a light patch called “blaze” extends to right half of the head; further back, a light W-shaped feature (“chevron”) extends from right to left chest. These colour patterns are important for the identifications of fin whale’s individuals. Its tall, powerful blow is up to 6m high, narrow and vertical.

Fin whales feed mainly on small shrimps called krill and schooling fish, engulfed by lunge feeding, opening the mouth during the deep, fast swimming, then filtered by racks of baleen. Over a thousand individuals inhabit the waters of the Pelagos Sanctuary. Off North-eastern Sardinia during summer, when the krill is abundant, fin whale is the second most common cetacean after the striped dolphin.

Sometimes fin whales occur between the islands of La Maddalena Archipelago crossing the Strait of Bonifacio. Ship collisions are a threat to this species, which seems to have poor ability to avoid impacts with large vessels. Fin whale is classified as Vulnerable (VU) on the IUCN Red List 2012 for Mediterranean subpopulation and listed on Appendix I of CITES.