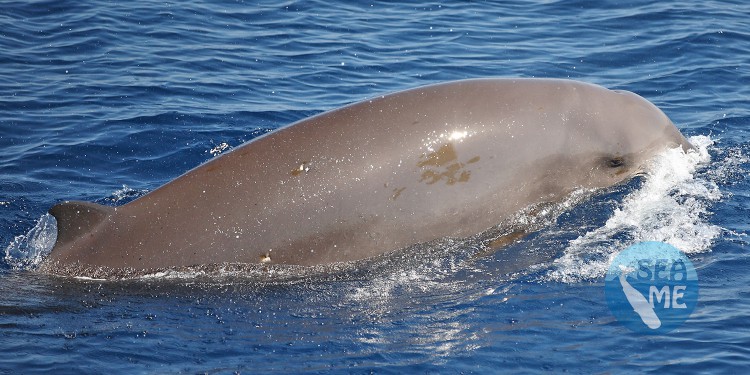 Cuvier’s beaked whale (Ziphius cavirostris) belonging to the family Ziphiidae, is a medium-size cetacean, around 6 m long, weighing on average 2 to 3 tons. Though it is the most widely distributed beaked whale species, it is still poorly understood and difficult to study, so that almost everything known about Cuvier’s beaked whale is based on the studies of stranded animals.

Their usually elusive behaviour, small group size, being very localized species preferring deep water habitat, typically far from shore make this beaked whale not easy to spot at sea. Cuvier’s beaked whales are deep divers: a new study has revealed that they perform the deepest dives made by any mammal on the planet.

Scientists have recorded in 2010 a Cuvier’s diving 9,816ft (2,992 metres) below the waves, spending almost two and half hours underwater, before resurfacing. These represent both the deepest and longest dive records ever documented among mammals. They are threatened by anthropogenic sound, especially Mid-Frequency Active (MFA) sonar that has stranded individuals several times worldwide, as well as seismic surveys (airguns) and by-catch in fishing gear.

Our study area, the central-Tyrrhenian Sea, is thought to be a favourable habitat for Cuvier’s beaked whale. SEA ME researchers are focusing on this species since 2011.

Ziphius cavirostris has been listed by the IUCN as “Data Deficient” (DD) for Mediterranean subpopulation and under Appendix I of CITES.