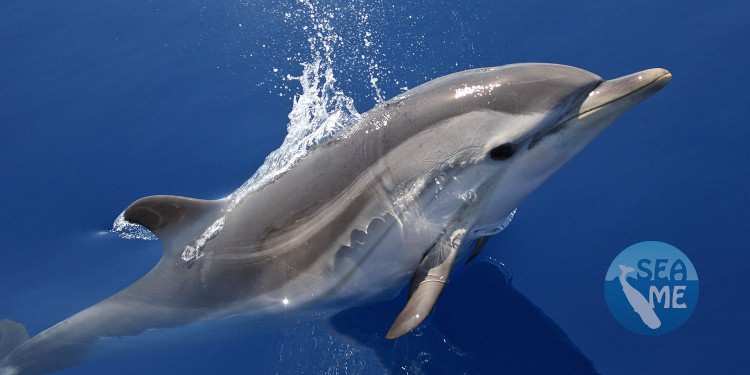 The striped dolphin is a pelagic cetacean considered the most common in the Mediterranean Sea, also occurring all year round off North-eastern Sardinia. This small dolphin has a long beak with a tall dorsal fin, reaching 2 m in length, 100 kg and living up to 30-40 years.

The colour pattern is general darker on the back and lighter on the belly. It differs from the common dolphin for the highly visible lighter stripes that are found on the lateral body areas as well as the dorsal. The eyes are usually surrounded by a dark patch. Three darker stripes each side depart from the eye to the anus region, one to the flipper and a third, short stripe, toward the ventral region. Striped dolphin is highly gregarious. In the Mediterranean Sea, its school size ranges usually from 10-40 individuals up to more than 100.

These dolphins are extremely active and they are known to take part in a variety of aerial displays (e.g. breaching, surfing, bow-riding, side-leaping). They can be quite confidant to the boats, usually except when calves occur within the school.

They feed opportunistically on small fish, cephalopods and crustaceans. The main threats to the species are represented by the negative impacts of human activities, such as pelagic drift-nets, the increasingly abundant plastics and other pollutants, and epizootic disease.

Stenella coeruleoalba has been listed by the IUCN Red List as “Vulnerable” (VU) for Mediterranean subpopulation and under Appendix II of CITES.