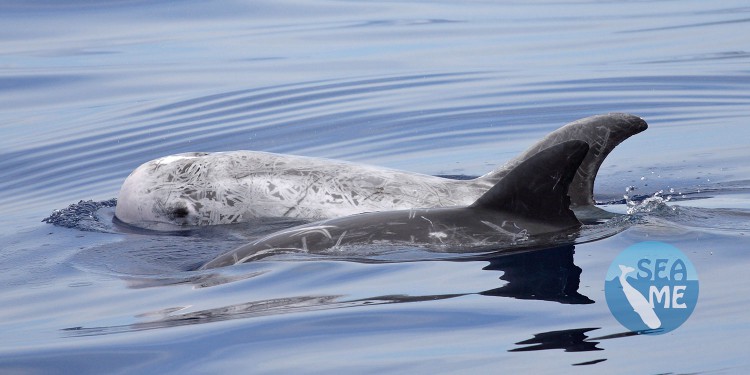 Risso’s dolphin has relative large, adult body measuring 2.5 to 3.8 m and weighing up to 500 kg. At long distance, in the Mediterranean it may be confused with the bottlenose dolphin due to its rather wide, tall dorsal fin. However, at close range this dolphin is quite easy to identify thanks to the lack of a beak, a rounded head, rather long pectoral fins and a robust body that becomes slim behind the dorsal fin to the tail.

Its external distinctive feature is the colour pattern, which changes with age and allows Risso’s dolphin to be photo-identified. This pigmentation pattern varies from light gray of calves to dark slate-gray, turning to white in adults, when they subjected to a depigmentation. Typically, adult Risso’s dolphin can be almost completely covered with extensive permanent scars that accumulate on the body with age, left by bites of its conspecifics during interactions. A white anchor-shaped patch, similar to pilot whales, is on their ventral side of chest.

Risso’s dolphin in the Mediterranean Sea occurs in groups of 3-5 up to 15-20 individuals. It has a slow, elegant swimming, exhibiting a wide range of behaviours such as breaching, spy-hopping and surfing. The ‘head-standing’ is an enigmatic behaviour displayed by this species, when it slowly rises the tail upwards, staying almost motionless in a vertical position with the tail stock out of the water, sometimes up to 10-20 sec. The reason of this behaviour is still unclear.

Risso’s dolphin prefers deep, offshore habitat above the continental slope, sea mounts and canyons. Sometimes it inhabits coastal areas, around oceanic islands with a narrow shelf. The main preys are cephalopods, especially squid, and less fish. Many aspect of this species as life cycle, reproductive behaviour, abundance and distribution are still unclear. In Italian waters Risso’s dolphin is a localized species and it is not so frequent. Risso’s dolphin even occurs off north-eastern Sardinia.

Grampus griseus is classified as “Data Deficient” (DD) for Mediterranean subpopulation and listed on Appendix II of CITES.