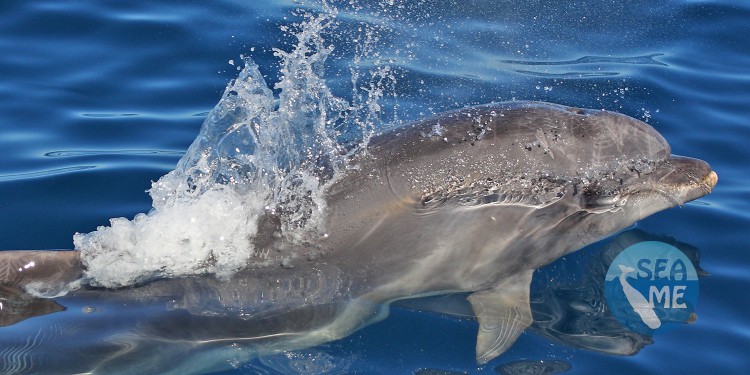 The bottlenose dolphin is the best known cetacean of the family Delphinidae, because of its frequent close encounters with humans in the wild. It has a powerful and muscular body and a short and stubby rostrum (from which its Latin name truncatus derives), provided with sturdy conical teeth. The term “bottlenose” refers to the particular head shape. In the wild it can live up to 40-50 years.

The bottlenose dolphin is dark grey, with lighter flanks and a paler underside. An adult’s average length ranges from about 3 m up to a maximum of 4 m. The male is slightly larger than the female, while newborns are about one meter long. Adult bottlenose dolphins can reach a maximum weight of 350-400 kg.

It is a very intelligent mammal, often taken from the wild, tamed and displayed in dolphinariums to generate profits, because it can entertain the public with its well known aerial displays. The bottlenose dolphin social organization is the most studied and best known among cetaceans. It is often seen alone up to small schools of 5-10 individuals, but sometimes groups of up to 20-30 individuals can be observed.

It lives worldwide in temperate and tropical seas, up to a depth of 200 m, in coastal areas, shoals, estuaries. It can adapt its diet according to the seasonal availability of its preys, mostly fish, cephalopods (cuttlefish, octopus and squids) and occasionally crustaceans. The bottlenose dolphin shares its habitat with many human activities and man exploits the same resources that it needs for surviving.

This interaction with humans exposes the bottlenose dolphin to several threats; the recent establishment of areas set aside for its protection represents a major challenge. In northern Sardinia inhabits a subpopulation of bottlenose dolphins that easily travels tens of kilometers, moving from southern Corsica to the La Maddalena Archipelago up to Golfo Aranci (Olbia). SEA ME Sardinia is monitoring this population also with your help.

The Mediterranean sub-population of the bottlenose dolphin is listed as “Vulnerable” (VU) in the IUCN Red List, in CITES Appendix II (i.e. the Washington Convention on the International Trade in Endangered Species) and in Annexes II and IV of the European Union Habitat Directive.